It Takes Way More Than Two

Last Tango in Chelsea. A tribute to Triangulo: New York City’s only studio dedicated to the Argentine tango—closes. For now. We await its transformation to a new location.

I’ve never been much of a party girl. Or if I had been, I have no memory of it. I hated bars. And a barstool doesn’t have any back support. I failed substance abuse, and the only altered state I could manage was a sugar induced one. But intoxication took on a whole new dimension, and all my head-spinning attempts at inebriation vanished the moment I took my first steps of the Argentine tango.

It was on pure whim, some amount of guts, a free Monday night, and close proximity to the PATH Train that first led me to Triangulo. As soon as I walked into this dance studio, I knew I’d entered another realm. The room was warm and inviting and evoked another century, with its burgundy colored walls, its gold accents, and crowned with a collection of ornate, mismatched chandeliers. And all of this against the backdrop of the lavish, Bruegel-like mural of tango dancers—in full swing. Dancers that I’d eventually come to learn were real people —the luminaries of tango past and present.

So with one foot in, I signed up for my first beginner-class package, and followed the well-worn path of tangueras before me—the dancing odyssey of intelligent women—who were once level headed.

Though after my first class of stepping on, and being stepped on, I wondered why in the hell I’d want to obey, and follow any man around a dance floor, engaging in something that set women back decades—backwards and in heels.

But, it only took until the second class to understand that my role was as important as his. For without me, there’d be no dance. And if I ever got past the awkward, jostling beginner stage, and avoided shoulder dislocation from over-enthusiastic leads, I might actually learn.

So one class per week became two, and two became three, and in no time I’d developed a pretty healthy tango habit. I became a willing participant in the twelve steps of tango addiction. I danced almost every night of the week. I planned my life around classes and milongas. I made excuses for, and bowed out of social events that interfered with my tango schedule. And if this were even possible, I found seven nights a week to love shoes that much more. My work suffered. My feet hurt. I laughed more. I talked about tango so much that my friends and family were either becoming very concerned—or entirely bored.

But nothing could stop me. How could I turn my back on so much joy? For the first couple of years, I took every level of every class with my beloved first teachers—the talented triumvirate of Carina, Laure and Dante. And if that weren’t enough of an embarrassment of riches, along came two powerhouse couples in the form of Carolina and Andres, and Ana and Diego. Triangulo’s teachers were determined to make dancers of us all­—and they used everything they had to get it done. With their passion, dedication, creativity, generosity, and a whole lot of laughing, we became tango dancers.

But Triangulo and the Argentine tango turned out to be more than I’d expected. Aside from learning the dance and having a cult-like, nifty, portable skill, I made friends. Good friends. People shared their lives with me—in between dances. I met someone who told me that he had nothing until he’d found tango. Another told me that after a bitter divorce, tango had prevented him for walking into oncoming traffic. And since then he’s met and married the love of his life—a tanguera he’d met at the Union Square milonga. A dear friend recently told me that tango allowed him to enter (with another) into a world without words. I saw how tango changed lives, and in some cases, it even saved lives.

I met people from all over the world, and though we spoke different languages, we danced in only one.

On a lighter note, I’ve never laughed as hard as I have on this dance floor. Whether it was cracking up mid-dance over some of the best jokes I’ve ever heard, or whether the hilarity was due to Dante’s Always-Keep‘em-Laughing School of Dance. At times, it’s been near impossible to maintain a serious tango face.

And all of that happened here, at Triangulo—our dancing living room.

These days though, Triangulo is much more than a dance studio—it has become a refuge. As I witness the decimation of social, economic and environmental justice, and when I can’t take another piece of breaking news, or one more obscene tweet, I always had Triangulo. And because of tango’s own constitution—its respected rules of etiquette, I knew that when I entered this studio of friends, or potential new friends, I could expect to enjoy an evening of vibrant, joyful, equitable, civil, and consensual dancing.

Tonight, when I leave for the last time, I’ll be accompanied by tango music as it tumbles out of the third floor window and onto 20th Street. There were times, that if I listened very closely, I’ve been able to hear the music almost all the way to 6th Avenue.

Carina, thank you for creating the warm, welcoming and vibrant place that we’ve come to love, and to depend on.

Whenever and wherever Triangulo’s transformation turns out to be—when you build it, we will come. 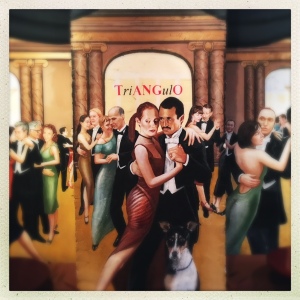 See what Triangulo is up to now.

6 Comments to “It Takes Way More Than Two”