Have Dance Floor, Will Travel

It’s early November and all but one* of New York City’s outdoor milongas (tango social dances) have closed up shop for the season. Our gracious hosts have filed away their NYC Parks Department permits, packed up their transportable sound systems and disassembled their portable dance floors, all of it stowed and in hibernation until spring.

I had a wonderful time of it this summer and early fall, dancing around the Shakespeare statue in Central Park, tangoing to live music at Lincoln Center’s Midsummer Night’s Swing and watching the sun set, reflecting orange on the Hudson as I gazed over my partner’s shoulder. But what really made this outdoor tango season wonderful was the addition of “Riverside Gypsy Tango” to my dance card.

The Argentine tango can have an all-embracing effect on people. It tiptoed into my life by infiltrating my daydreams, co-opting my conversation and compelling me to go out dancing every night of the week. It altered my posture (in a good way), expanded my musical tastes and wardrobe, and it continues to fuel my creativity.

It affects others in different ways. In the case of my friend Dirk, tango led him to buy 800 pounds of portable parquet dance flooring.

Dirk, an enterprising tanguero (male tango dancer) set out to realize his dream of an egalitarian, come-as-you-are milonga. He wanted to create a space where anyone could ask anyone to dance, regardless of gender, age, ethnicity, previous experience, what you’re wearing or the amount of leg you choose to show. And most importantly, he wanted to stage the dance in an outdoor public space. “Tango is a dance of the street,” he says. “Whether people come by to dance, or they chance upon it, maybe while walking their dog and sit and stay to watch for a while. Each person shares and contributes to its energy and so I’d like each person to feel equally involved and welcome.” He joked that his ultimate goal really was to create a place where he could dance tango in his pajamas.

So with an initial 200 pounds of DanceDeck Deluxe simulated oak parquet modular flooring (which he kept stacked against a wall in his fifth-floor walk-up) and a dream, Dirk scouted the length of Riverside Park for ideal locations to stage his equal opportunity milonga. He eventually secured Parks Department permits for three Hudson River locations; Locomotive Lawn at 62nd Street, Pier I at 70th Street, and the Soldiers’ and Sailors’ Monument at 89th Street. Dirk also convinced the department to let him store the flooring at the 79th Street Boat Basin. Then he enlisted our friend and now resident DJ, Jun Kim, and the nomadic “Riverside Gypsy Tango” was born.

Locomotive Lawn is aptly named, for it features retired locomotive No. 25 and was once part of the Penn Central freight rail yard. It’s a quirky spot: The lawn portion, which runs between Trump Towers and the Hudson River is a patch of Astroturf that seems more like a mini-golf course than a meadow. But still, it’s a wonderful place to set up a dance floor with its stunning river views.

Pier I was also once part of the rail yard.  It was built on the remains of the original wooden shipping pier, jutting 795 feet into the Hudson. Dancing at the tip of the pier, practically on the water, in the middle of the river, is nothing short of miraculous.

But of the three locations, my favorite, is the Soldiers’ and Sailors’ Monument. Built atop a promontory, at the north side of the marble-columned structure and down the grand staircase is a charming formal terrace. The balustraded balcony with its arcing granite benches sits high in a crown of trees. It’s a perfect place for contemplation, Shakespeare re-runs and Argentine tango.

On a warm Friday evening at the end of May, with Metro card and dance shoes in hand, I crossed the Hudson and made my way to the Upper West Side to participate in Dirk’s humble, egalitarian milonga experiment, and to scuff up and help inaugurate his parquet floor.

I was expecting Dirk to make an announcement, but there was no mention made of setting aside the long-established protocol where men invite women to dance. So I followed tango etiquette and sat patiently (sort of) for an invitation. I made a mental note to add the Upper West Side to my repertoire of places where I’ve waited to be asked to dance. Which felt strikingly similar to waiting to be asked downtown.

Eventually I was invited to dance by one of the founding fathers of social tango in New York. After two songs, he “thanked” me (ended the dance) mid-set, but he was so kind about it that I hardly had the chance to feel terrible. He escorted me back to my granite plinth, sat down and proceeded to put on a down jacket and a wool cap. I questioned him about his expedition gear on such a warm spring night, the kind of night we’d waited for all winter. He told me he became cold and tired easily because he was anemic. I wished him well…but…what a relief! Our abbreviated dance had nothing to do with me–or my dancing.

As it turned out, and as Dirk had hoped, dancing was only part of the evening. The tango music, artfully arranged by Jun, with its melodic tone that is sometimes mournful and at other times playful, was made even more so by the acoustics of our semicircular granite tree house. I talked with friends and watched the dancers gliding across the floor under a canopy of green. I took a stroll around the patio,  petted dogs and chatted with people who had happened upon us and were curious about tango.

At the end of the evening, I asked Dirk why he hadn’t announced a waiver of the time-honored code of who-asks-who-to-dance. “As my understanding of tango and its protocols have evolved” he said, “I’ve come to feel that each person approaches the dance along their own path, so in order to give people latitude to explore their feeling towards tango I wanted to leave my own expectations out.” So in lieu of a group agreement to do otherwise, 125 years of tango etiquette and its codes prevailed.

His generous, open spirit, love of tango as well as the stunning Riverside Park locations is why Dirk and Jun’s Riverside Gypsy Tango became a resounding success. So much so, that they eventually had to quadruple the dance floor to 40 square yards, weighing in at a hefty 800 pounds.

At the end of that first night back in May, we passed the hat in appreciation of a magnificent evening of tango and perhaps to help offset the cost of the chiropractic care that Dirk and Jun would surely need after packing up and hauling the laminated flooring back to the 79th Street Boat Basin. Fortunately, all ten blocks are downhill.

*Note: For the most intrepid of tangueros, the milonga on the mighty Hudson at the end of Christopher Street Pier is still going strong. So put on your base, insulating and windproof layers, and if you’ve got shearling-lined tango shoes–wear them. This milonga runs until the first snow. 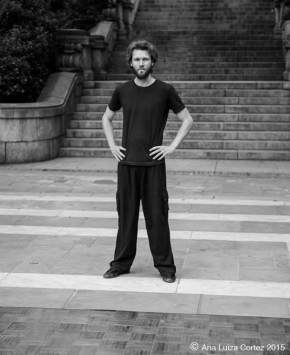 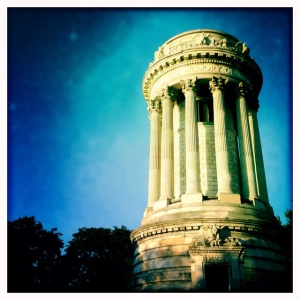