“Nancy, do you wear panty liners when you hike?” Fran asked.

It was the day before we were to begin a three-week Himalayan-trek in Bhutan—The Land of the Thunder Dragon. Hashmat Singh, our guide, and a group of 13 fellow-trekkers were meeting for the first time at the buffet lunch hosted by our hotel.

So began my 15-thousand-foot and above, friendship with Francine Gordon.

She was a 57 year-old, retired Phys Ed teacher from Jericho, Long Island. She was loud, emotional, inappropriate, meddlesome, and curious. And I loved her for it—eventually. She had the kind of smile that took over her entire face and she wore her heart on the sleeve of her Patagonia base layer. Though what eventually cemented our friendship, and what drew us together, began more out of survival, than sociability.

We were a few days into our trek to the base of the 24,000-foot peak, Chomolhari. Fran and I were among the slowest and often the last hikers except for Kipchu, the sweep. He was easy to find wearing a traditional mid-calf, white cuffed, plaid, kimono-like Gho—with knee socks and hiking boots poking out from underneath. And to top it off, he carried a full spectrum, rainbow-paneled umbrella to signal the end of the line—even if it wasn’t raining.

That day, we found ourselves alone, with the temperature dropping, and the sun beginning to set behind a far-as-the-eye-can-see massive boulder field. With no real discernable trail, save for a muddy yak print now and then, we plodded on hoping to see the other hikers ahead of us or Kipchu’s cheery umbrella—popping up over the gray granite landscape, behind us. We saw none of these human trail markers.

Fran stopped frequently to rest, and was becoming anxious at the possibility of being lost. I was more confident in navigating the barely detectable path, and between the two of us, I chose to be the rock of our paired down expedition as we pin-balled our way through vast rocky field. That was the moment that Fran and I became lifelong friends.

In the distance, if we squinted, we could catch the glint of a blue tarp. It’s the unmistakable, industrial, United Nations blue that says developing country, or emergency shelter. It’s also the blue of our camp’s dining tent that held the promise of a cup of hot tea and a biscuit. But this was one of many false summits of the day, and as we got closer we realized that the blue was the tarp of a nomadic yak herders home.

The bouldered terrain eventually gave way to a meadow that was more pasture than rock. I guess the yak herder’s tent and the grassy paddock should have been a pretty good clue as to what happened next, yet we were still startled—no terror-stricken, to see a herd of shaggy, snorting, bell-clanging yaks barreling towards us—shepherded by a teenager carrying a stick! At home, I was weekend-hiker and the only four-legged creatures I’d come across were smiling golden Labrador retrievers. I had no training for this sort of thing. I mean what does one do when one is about to be trampled by thousands of pounds of beef on hoof? Luckily, there were a few scattered boulders about, and we ducked behind one of them as we waited for the stampede to pass, and the dust to settle.

It was dark by the time we got to the end of the pasture, and finally we could see the blue glow of our dining tent. Hashmat and some of the other trekkers came running toward us lit by flashlights and headlamps. They escorted us, as we dragged ourselves into camp. Fran and I were welcomed by resounding clapping, and cheers and the tireless, cook-staff plied us with cups of hot, steaming tea—and biscuits.

Fran and I continue our lively friendship to this day, and we often recount our Bhutanese adventure and some of our other Himalayan escapades—at sea level. 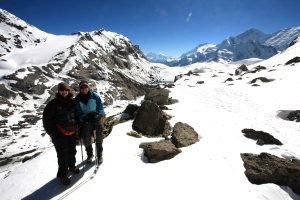 Fran’s love of the Himalaya led her to create Nepal Program For Progress. It’s a non-profit that provides educational opportunities for children in remote regions of Nepal. And she’s there now as I write this!